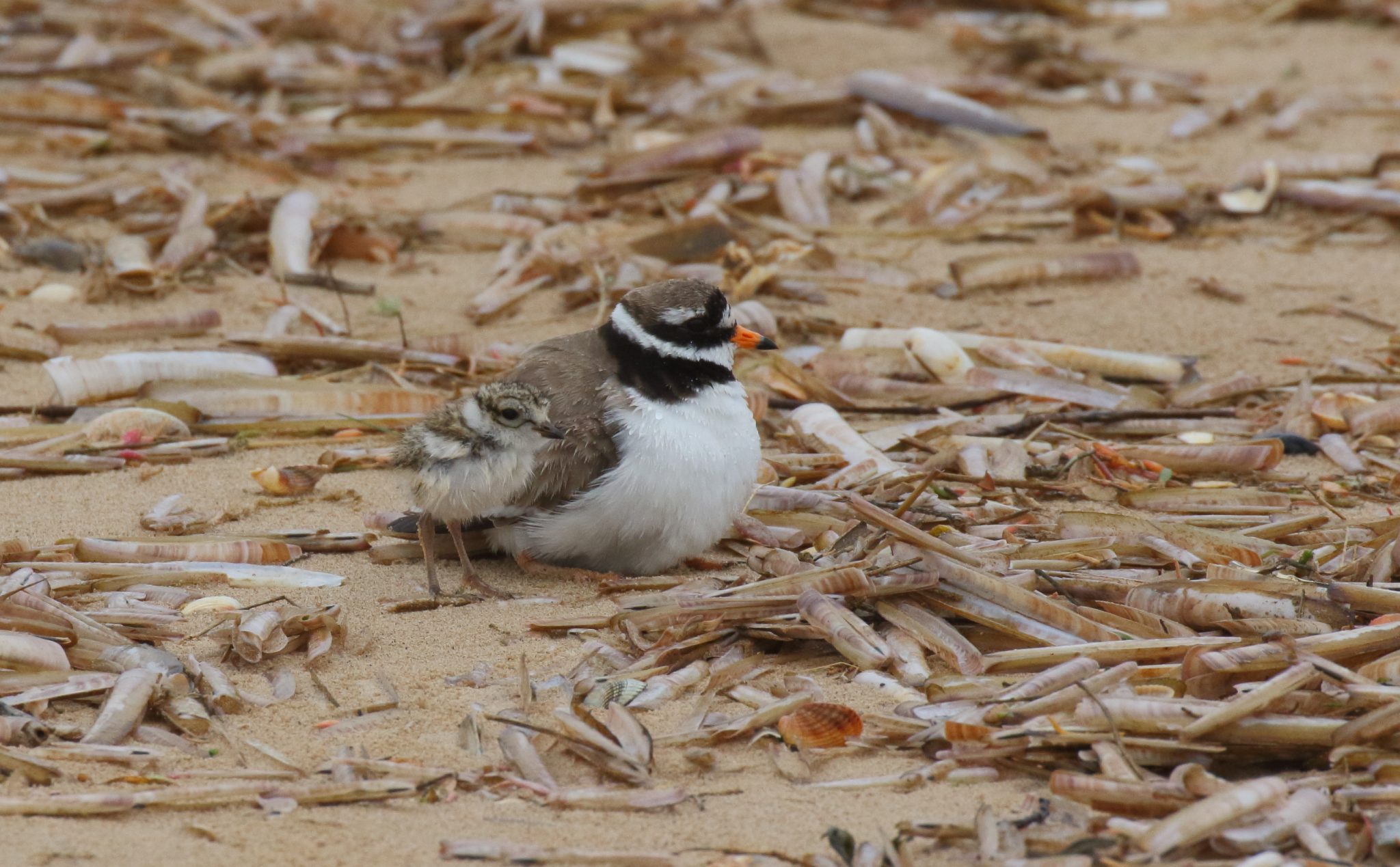 In our latest journal entry, Andy Bloomfield, Senior Warden on the Holkham National Nature Reserve, discusses the team’s important sand dune restoration work and why the dunes need to be protected.

The badly eroded foredunes between Holkham and Wells

Everyone loves Holkham’s sand dunes: dog walkers, sunbathers, picnickers, children that leap off them, birdwatchers that scan out to sea from their highest ‘peaks’… the list goes on. But how many of us think any further than their value as an amenity? Who thinks about their formation, their erosion, the role they provide as a sea defence, their beauty within a dynamic landscape and the damage caused to them inadvertently by all manner of actions? All these impacts and scenarios play their part in the ever-changing scenery of Holkham Beach, an integral and most popular part of Holkham National Nature Reserve.

The sand dunes of Holkham act very much like its spine. They are equally as important to our coastline as our vertebrae are to us. Like a backbone to the shore, Holkham’s dunes stretch up to almost 7km between the harbours of Wells and Burnham Overy; they really are the spine of the nature reserve. They give the reserve its strength and resilience to all but the fiercest of tidal surges. As well as being an integral part of our defence against the sea, it is also home to a fabulous array of flora and fauna. North Norfolk’s sand dunes have recently been recognised as some of the finest in the UK due to their biodiversity, and Holkham NNR is pleased to be a major part of that living and constantly evolving ecosystem. 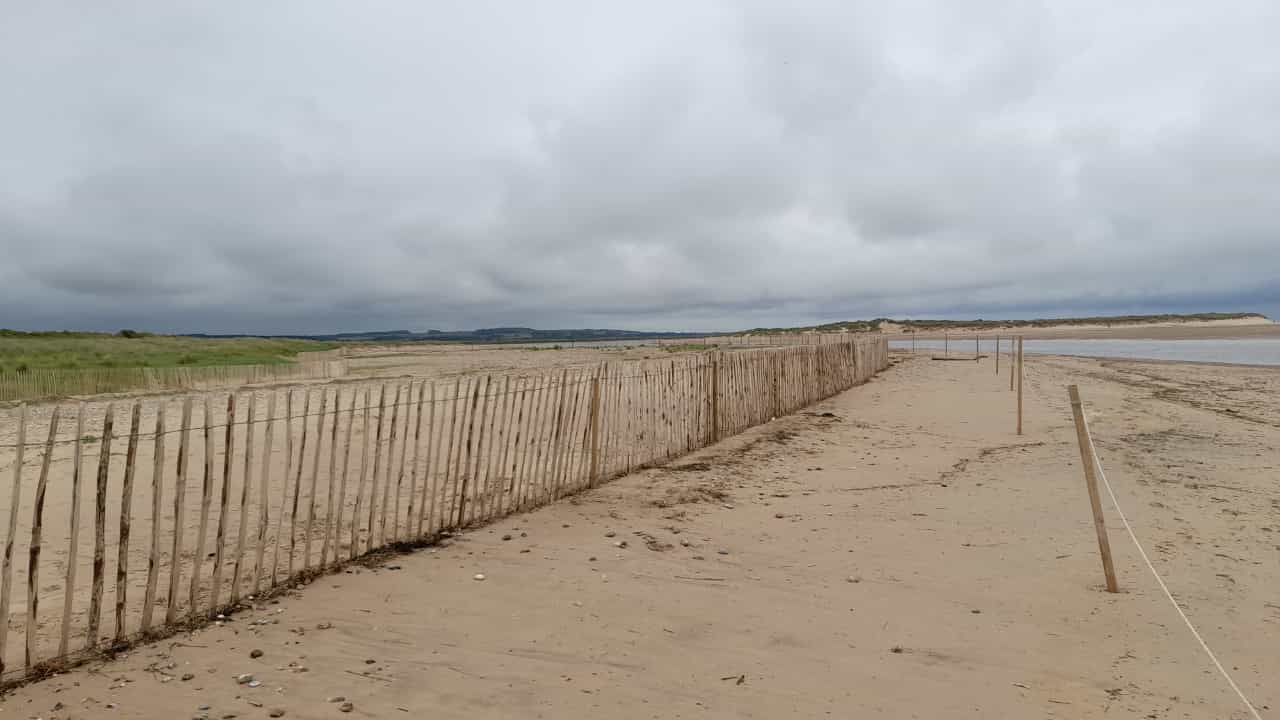 Some of you may have noted some recent changes such as chestnut paling fencing erected around sections of the outer dunes alongside scrub and small pine tree removal from the older dunes closer to the pinewoods between Holkham and Wells. Many questions have been asked as to what is happening and so here are the answers. Hopefully all will be revealed, thus creating a greater understanding into the complexities of the management and the impacts and implications that could happen without continued intervention.

Originally, Holkham was part of an offshore barrier island system made up of sand bars, shingle ridges (or ‘binks’ as they are known locally) and dune islets in varying stages of development. Sand dunes form when the actions of the tide and the wind shift sediment along the coast and this accumulates on our beaches. Shingle ridges form first and quickly attract maritime plants; succulents such as prickly saltwort and sandwort followed by grasses like sea and sand couch and then marram. They act as binding agents and soon fledgling formative dunes start to take shape. Nature then continues to build them; they may grow over the course of months and years into larger ‘yellow dunes’, or they may get knocked to smithereens by tide and wind, eliminating their previous growth over one large tidal and weather event combined. This same process has been occurring for hundreds of years and continues at pace to this day, giving the coast its dynamism.

Where the dunes are older, they become ‘fixed’ or ‘grey’ dunes. These are more botanically rich and support far more invertebrates than the yellow dunes. At Holkham, almost 5km of pine trees were planted in the late 1800s to stabilise the shifting sands and prevent sand blowing inland on to crops. As conservationists we, however, recognize the natural value of the dunes: they are certainly more specialized and home to more threatened species than the wood itself. For that reason, we are duty bound to maintain the dunes and ensure they do not turn to a further extension of the wood, hence the removal of pine and holm oak seedlings. 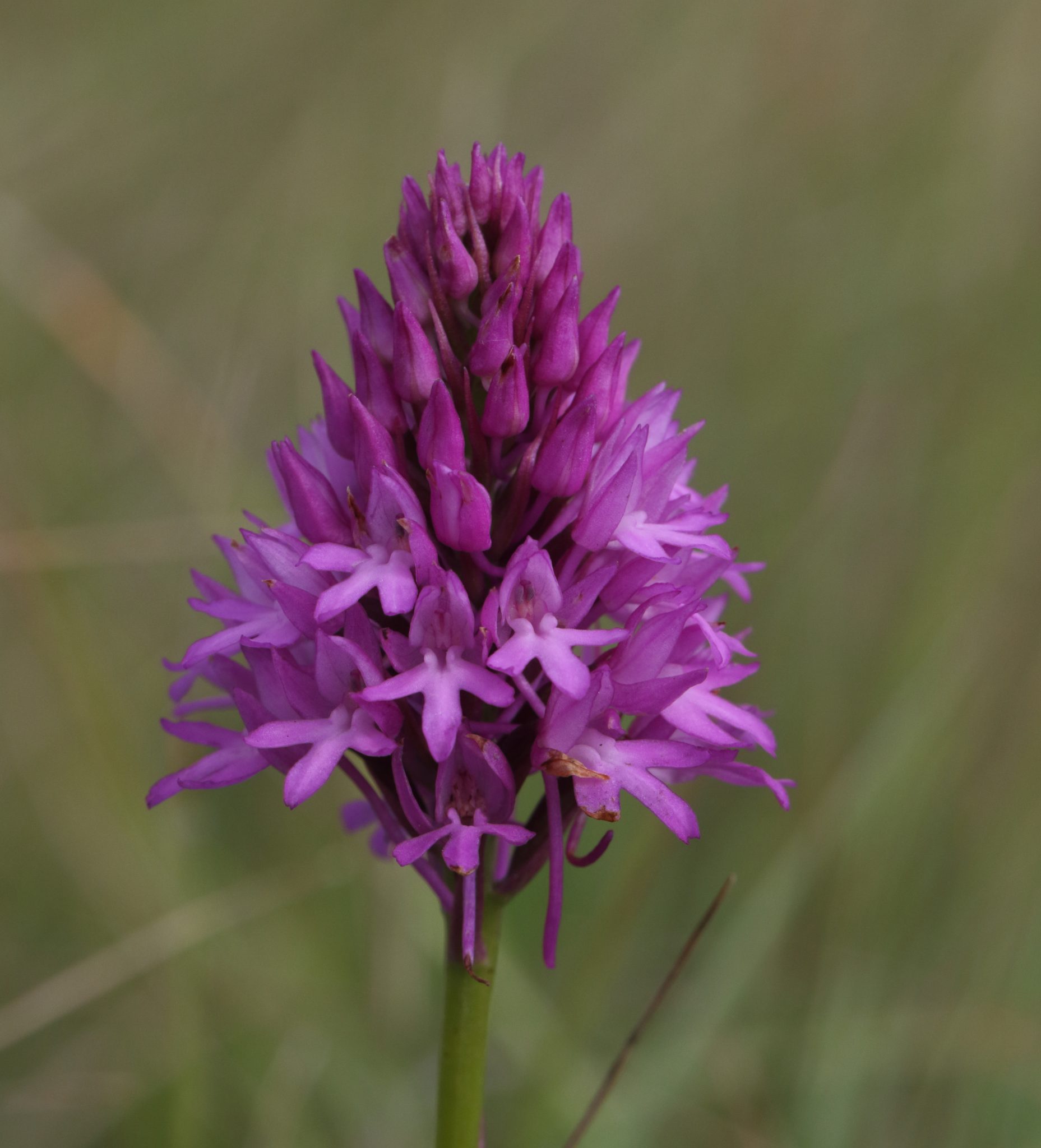 Currently, Holkham Bay offers the opportunity to see first-hand all these changes. Since 2013, when large chunks of the dunes were knocked for six by our last significant tidal surge, a period of recovery has taken place. Instead of a constantly eroding shoreline our coast is growing. The central dunes are spreading landward and a rapidly evolving ridge of dunes between Holkham and Burnham Overy, the area roped off for breeding shorebirds, has stabilized beyond all belief since its formative stages first noted in 2010. It too is heading landward and eastward. It looks like it may join up in the future, possibly creating another tidal saltmarsh lagoon behind it. This, of course, could all change if another tidal surge transforms it into yet another different landscape. Look what happened at Wells in 2013; a new tidal channel was born midway between Holkham and Wells, and the outer dunes of Wells beach were completely lost. Only time will tell. 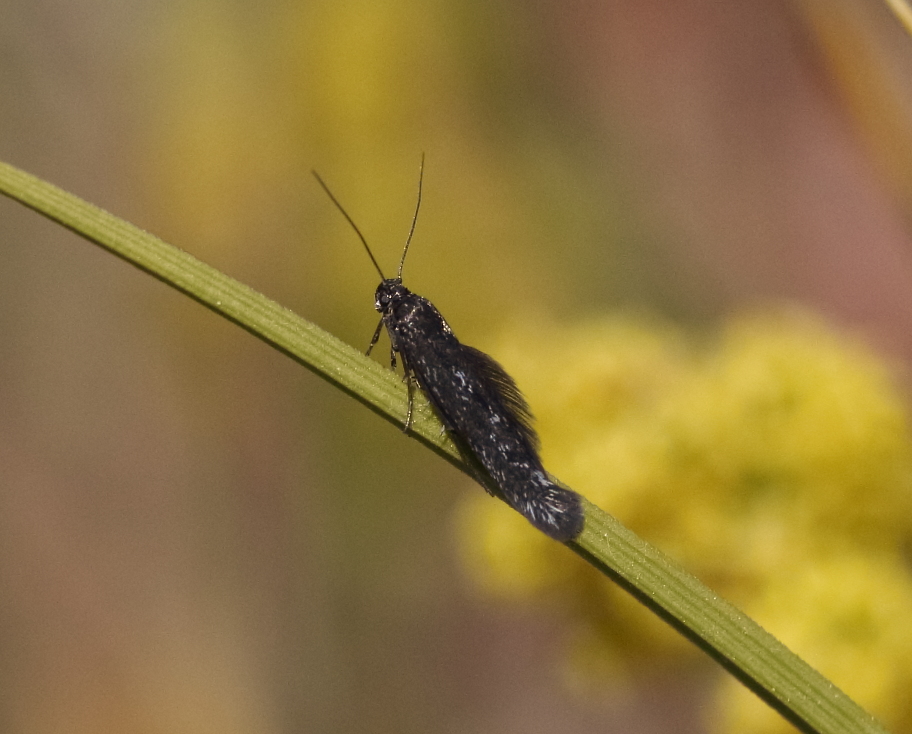 The very rare Norfolk micromoth, a British rarity that is common on the dunes at Holkham

Holkham’s dunes are home to much rare and wonderful wildlife. Fungi such as the Tiny Earthstar and the Dune Roundhead were first seen in the UK here at Holkham. Colourful orchids hide away in the damper slacks. Natterjack toads serenade us with their nocturnal vocalisations. Rare spiders such as the White-spotted False Black Widow and the Sand Running Spider have a home here. Tiny micromoth the Norfolk Owlet and a vivid green beetle – Clanoptilus barnevillei – are both familiar sights in the summer months, yet they remain extraordinarily rare elsewhere in the UK. Birds like Ringed Plovers, Oystercatchers and Little Terns nest where the formative dunes are still dominated by shingle. They live a knife edge existence. Weather and tides hamper their success, as does all manner of natural predators. This is why it is so important to adhere to the new guidelines on dogs, all sign posted and mapped. It all helps.

The Ringed Plover is a fast declining beach nesting bird. We need your co-operation for successful nesting to occur

As you visit the beach and dunes of the reserve this summer you will see enclosed areas where birds nest and stretches where chestnut paling has been erected to aid in a recovery process of healing some of the bigger wounds inflicted in the 2013 tidal surge. Cyclists are requested to dismount through the dunes, BBQ’s, overnight camping and open fires are not permitted at all. It might at times seem an inconvenience but adhering to these simple guidelines will help us preserve this fantastic, yet extremely sensitive environment, for future generations to enjoy just as we do today. In such a great place as Holkham’s coastline is that really too much to ask for? 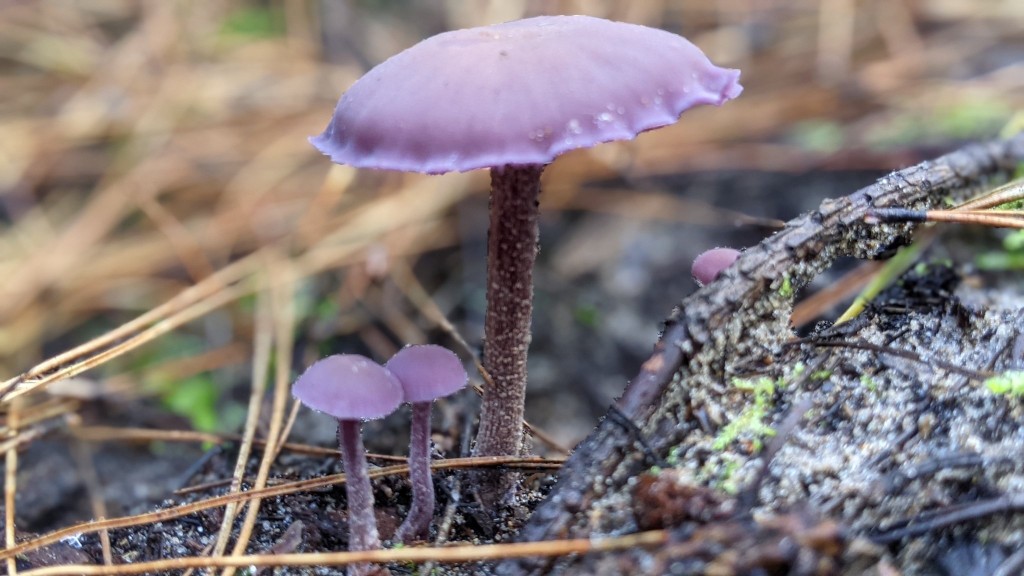 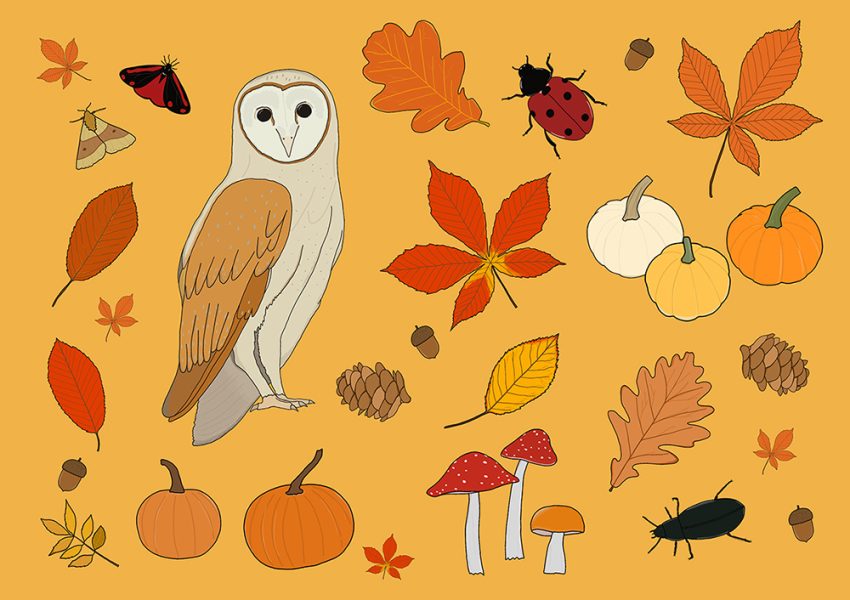 Five Tips for a Green Halloween 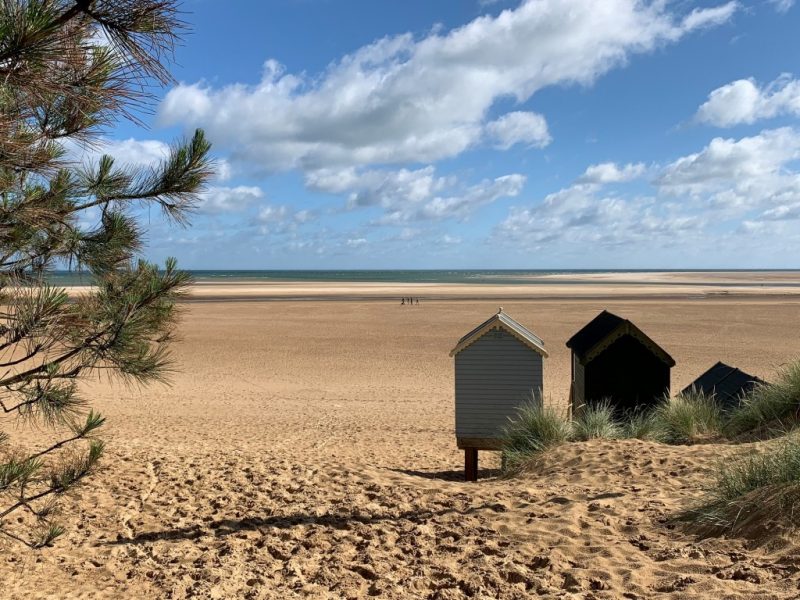 Safe and Sound when Water is Around 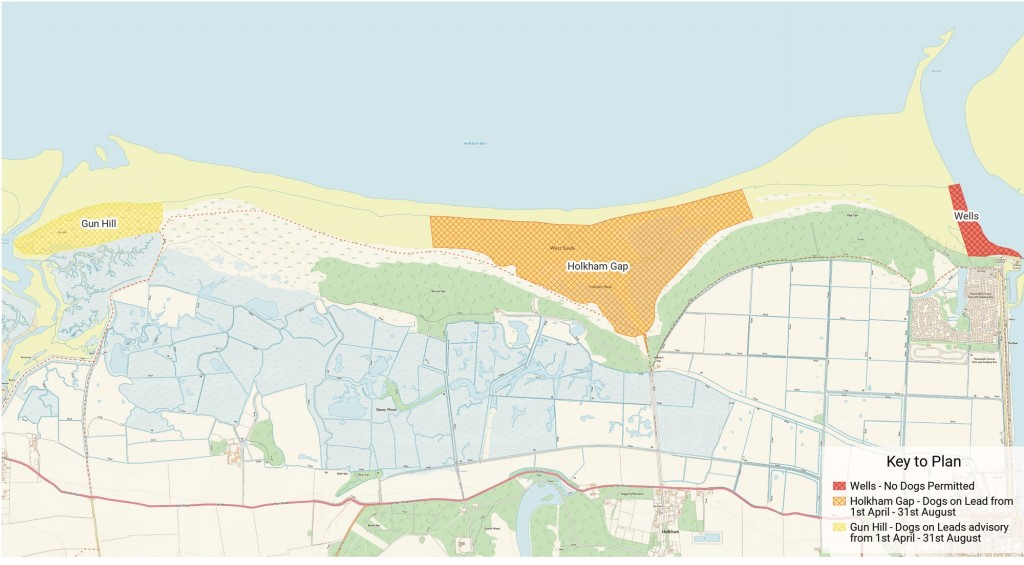 We love dogs, but we love wildlife too